This initiative is all about participation, inclusion and above all fun! 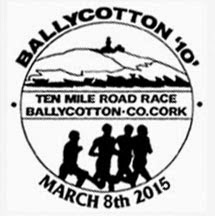 The entry procedure for the 2014 Ballycotton 10 mile road race has now been announced and it is pretty similar to last year.

The following is the entry procedure for next year’s Ballycotton ’10’, to take place on Sunday March 8th. Numbers are limited as usual and there be will be a combination of online and postal entries as follows:

2) A PDF copy of the entry form will be published on the website on Monday December 8th (forms will also be available in John Buckley Sports, Tri n Run in Midleton and Ger Wyley Sports, Dungarvan, the same day). Also, those who have sent in stamped addressed envelopes will have the forms posted out on Friday December 5th. The first 200 non-club entries to arrive by post will be added to the above number, giving a total of 2,500.

3) After that, only AAI club members and those who ran the four races in the Ballycotton Summer Series 2014 will be accepted (by post) up until Friday December 19th and for those living overseas up until Tuesday January 6th.

4) As usual, a limited number of elite entries will be available nearer the date.
Entry fee for the 2015 race is again €15 (plus booking fee of €1.05 if entering online).

******
The main difference to last year is that entries will open twice on Friday the 5th of December.

Note that there are 200 places available for non-club runners who enter by post. In other words, if you are a non-club runner and you did not complete the four races in the 2014 Summer Series then you really need to make sure that you enter online.

Please note that it is highly likely that all the 2300 online entries will sell out on Friday the 5th of December. There is also a good chance that the online system may well crash so allow for delays.

If you are a club runner or have done the summer series then just print out the form and post it in before the 19th of December.

It's also worth noting that despite the huge demand for places and the fact they could easily charge twice the price, the organisers have kept the entry fee at €15

Whether you are a serious runner, jogger or just want to get fit Bray Runners AC is the Club for you.

Our Club was founded in 1983 primarily as a marathon running club, however over the years we have introduced a juvenile section and cover a wide range of athletic disciplines.

Well done to all our athletes!