This initiative is all about participation, inclusion and above all fun!

Rob Heffernan to Get Bronze From 2010 Euros

Rob Heffernan to get another bronze medal due to Russian getting caught?

There is news at the moment that the Russian race walker Stanislav Emelyanov has been caught due to violations to his biological passport. His results since before 2010 will no longer be counted. 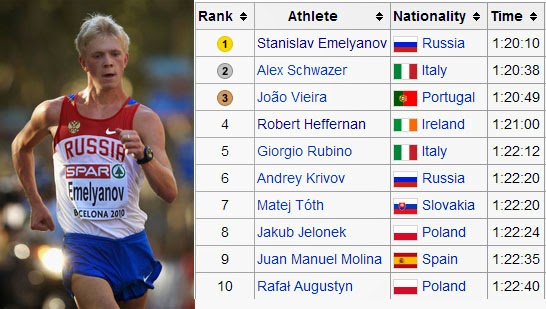 In 2010 at the European Championships in Barcelona, Emelyanov won the 20 km walking race. Rob Heffernan finished 4th in that race. If the suspension is confirmed then Rob should be moved up in 3rd place and a bronze medal.

15:45...From Rob Heffernan on Twitter...
Unofficially being told that I  am going to receive the BRONZE medal for Euro Champs 2010 20km after Russian has been done for drugs.

Whether you are a serious runner, jogger or just want to get fit Bray Runners AC is the Club for you.

Our Club was founded in 1983 primarily as a marathon running club, however over the years we have introduced a juvenile section and cover a wide range of athletic disciplines.

Well done to all our athletes!